During his visit to City Point in 1865 Abraham Lincoln met or was encountered by literally thousands of soldiers, sailors, and civilians – white and black. The number whose accounts presently constitute the basic source pool is quite small in relation to that total. I am convinced that many more exist in family collections, obscure newspapers, small historical society archives, or places I can’t even imagine. I’m talking about letters, diaries, post-war memoirs, or military records. If you have any of these that mention Lincoln at City Point in 1865 (including Petersburg and Richmond), please continue on to the contact page to see how to reach me. And thanks!

There are clues or suggestions to indicate that some individuals placed close to the story may have left as yet undiscovered recollections of their Lincoln encounters. If you know of this material or someone who does, I want to hear from you! Here’s my pick list:

The commander of Lincoln’s naval escort vessel and his occasional companion during the visit, Barnes is the author of two 1907 articles on his time with Lincoln. There is strong evidence that Barnes first wrote of his encounters in letters to his wife in 1865, and that he prepared edited versions of these letters for private distribution to his family. They represent a potentially unparalleled source of details from a man who literally walked in Lincoln’s footsteps during his visit to Richmond.

A 24th Corps staff officer in April 1865, he saw Lincoln in Richmond and briefly spoke about it in 1910. He was a significant citizen of Ithaca, New York, and very active in the community. It is hoped he might have written something of his experiences, though nothing as yet come to light.

An officer on the staff of Richmond military commander Godfrey Weitzel, he left a brief recollection of Lincoln’s visit in an early 20th century edition of the New York Herald. It is possible he left a larger memoir still in family hands or tucked away in some archive.

A naval officer with the James River Squadron in 1865 and on the staff of Rear Admiral David D. Porter, his official biography proudly noted that he formed part of Lincoln’s escort during the President’s Richmond visit. His papers in the New York Historical Society offer no insights into this experience and it is hoped that he either wrote or spoke of his time with Lincoln in papers not part of this collection.

According to the log of the USS Malvern, Lincoln was accompanied on an April 5 Richmond visit by a detail of 24 marines.  The ship’s muster roll carried the names of 30 who were aboard at that time. Beyond this nothing is known about them or their experiences on that day. I am hoping that descendents can help me fill in the gaps. With apologies for misspellings as transcribed by me from the ship’s papers, here is the full complement of marines present on April 5, 1865 aboard the USS Malvern: 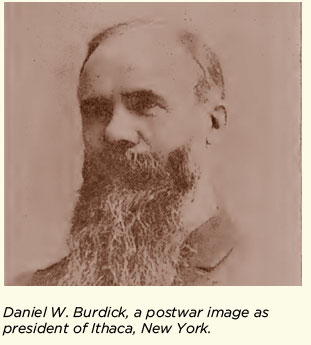